Opportunities and dangers of digital technologies: The views of children and young people on their leisure time behaviour – Andreas Chmielowski 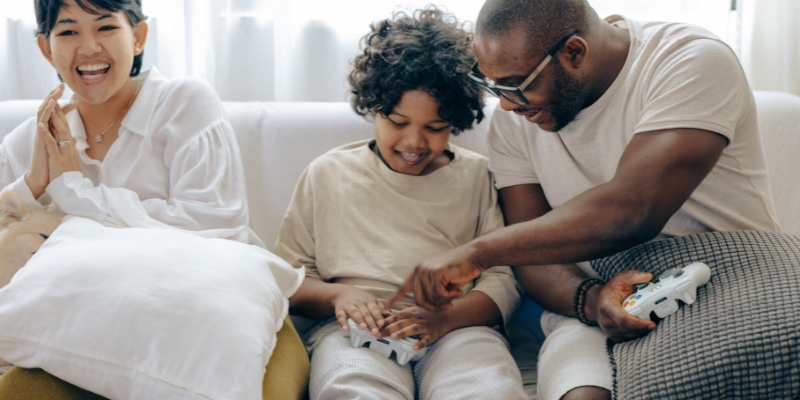 By Andreas Chmielowski, MSc., PhD student at the Department of Economics at the University of Gothenburg. Andreas was a research associate at AIF until late August, where his research focused on the influence of information and communication technologies on the leisure time and socialisation of children and young people.

This blog post is also available to read in German below.

The influence of digital everyday technologies on the lives of children and young people is an increasingly researched field. This applies to the resulting opportunities as well as to the associated risks and dangers. From the literature, we know that information and communication technologies (ICT for short) are beneficial in the identity development of young people [1]. They support civic-participatory behaviour [2] and facilitate the development of social contacts and skills [3]. However, ICT can also open pathways to inappropriate or harmful content and cyber-bullying [4], as well as lead to addictive behaviours [5].

In the course of the DigiGen project, the Austrian Institute for Family Studies (AIF) investigated the influence of digital transformations on the “Digital Generation”. For this purpose, 20 qualitative interviews were conducted in Austria with children and young people between the ages of nine and 16, in which they were asked about their use of digital media and technologies in their free time. A central focus here was the perspective of the children and young people: What opportunities and potential dangers do they see through ICT?

The positive role that ICT plays in their lives was emphasised several times by the interviewees. Among other things, they mentioned the practicality of everyday communication, access to a very wide range of entertainment, the ability to document memorable events, and the ability to access information quickly and easily.

The most prominent positive aspect, however, was the use of ICT for community purposes. This includes the use of text messaging and video call services for virtual exchanges with friends as well as playing online multiplayer games together, usually connected via voice chat. Especially in recent times, the importance of this has increased again due to COVID-induced lockdown regulations. Some respondents reported online infrastructures, such as a voice chat server, that they had set up specifically to get through this period of diminished physical contact together with their circle of friends. Some also stated to have met new people through the internet – sometimes from a different country with a different language – with whom they now interact regularly. The high value placed on the social aspect was also reflected in the responses to the question of what was most important to respondents when playing games: in addition to the challenge and the potential to discover new things, the multiplayer function was named as essential. Children and young people thus attach great importance to the possibility of using ICT to make and maintain social contacts.

Right at the beginning [of the lockdown], we made sure to create a Discord group with our entire circle of friends. That worked well. (Michael, 141)

1 The statements of the children are translated from German and the names are altered to protect their identities.

Another topic was competence in dealing with digital technologies and media, which mostly manifested itself in the role of “technology expert of the family”: Some children reported being asked regularly by their parents or grandparents how to operate certain functions on the smartphone. The opposite case, where parents had to explain to their children how a device worked, occurred less frequently. The acquisition of technical skills and a certain self-confidence in dealing with ICT, combined with an “expert position” in the family environment, is thus noticed by the interviewees – and enjoyed by some.

Yes, she [the grandmother] often has a new cell phone and then we have to show her how to use it, and then she knows her way around. Then, when she needs something again, we sometimes come to her, and when we sleep at her place again, we show her what she can do. (Marie, 9)

The internet also plays an important role for some respondents in cultivating specific interests, such as reading Harry Potter fan fiction or following news about U.S. domestic politics. Of the older respondents in the sample, some also reported using the internet in principle for purposes outside of entertainment, such as keeping up with world events, which in turn is associated with the development of social participatory behaviour [2]. In the literature, cultivating personal interests is named as an important aspect of identity development [1].

I actually ranked it a little bit like this: On Instagram, I tend to look at fun stuff, as well as on TikTok, while I actually use Twitter mainly for following politics or watching the news. So it’s more like that, I read through the tweets of politicians and just look at what the debates are. Especially for the American election campaign, I used it, too. (Joseph, 15)

When asked what risks could be associated with the use of ICT, health consequences were mentioned first and foremost, such as deterioration of vision or the risk of addiction. Some respondents also mentioned lack of sleep and the danger of drinking “far too little” during long gaming sessions. Of those who mentioned these risks, some also reported strategies they had devised to prevent them: occasional intentional absence from any ICT use for some time, strict periods of rest at night, or having a glass of water while playing.

Okay, and why do you think it’s important to them [parents] that you stop playing? – Because otherwise it’ll mess up my eyes and such. Otherwise, I’ll have to wear glasses. (Donald, 11)

I would say that if you are on the computer too much, you can’t sleep in the evening, for example. Because you are too excited, or because of the blue light that is on the computer. (Lara, 13)

As a psychological risk, some respondents mentioned the potential of ICT to distract from learning and thus impair school performance. In some cases, they talked about how their parents set rules and take countermeasures. One older respondent also said that he had actively sought alternative leisure activities himself and found one.

At that time I had, I think, 15 or 16 hours a week, and I could portion them. That was just too much for me. And so I […] looked for something in sports to distract me from that. And then I found that, thank God, with tennis. Because I was at home too much. (Fabio, 13)

A prominent issue that was taken very seriously by all respondents was dealing with strangers on the internet. Most reported either having never contacted strangers or doing so only to a very minimal extent – for example, by playing on the same server. Only a small proportion of young people reported having had long conversations with strangers. In most cases, communication is limited to the immediate necessities of the game. The few who said they had actually made friends emphasised that they had been very careful and had waited a long time before exchanging personal information.

Well, I have three internet-best friends, and I met them through games. But I’m rather cautious, because I don’t trust so many people there. Because something can always happen. (Lara, 13)

Some young people reported negative experiences such as anger, stress and pressure, which they sometimes experienced both in online games – for example, because mistakes are made that cost the team victory – and in online discussions. They noted major differences between online and offline dispute cultures, particularly with regard to the tendency for conflicts in the virtual space to be more emotional and polarised. According to the young people surveyed, this is due to a different perception of the other party in online conflicts and the ease with which people can block or ignore each other in a dispute. Reconciliation after the conflict thus becomes more difficult. Some respondents reported simply avoiding such conflict situations by, for example, leaving the server or avoiding the unfriendly atmosphere of particularly competitive games altogether. Others said that they actively defend themselves against unfair negative comments from fellow players.

Because if they attacked me or yelled at me, I would just leave. Because I don’t care. I just want to play computer after a hard day. Then, they drive at me, I don’t feel like it. Then I just leave. (Lara, 13)

But, as I said, I just ignore it, and I mean, sometimes I just write back, like, yes, you played badly yourself, that kind of thing. Because then it just really gets to me. (Alexander, 16)

Some of the interviewees also spoke about bullying and peer pressure offline – for example, in class – because they do not own certain devices or because they are not allowed to use certain apps due to a parental ban.

The initial analysis results of the interviews show that the children and young people interviewed are very well aware of the opportunities ICT offers them and which are documented in the literature – a current overview can be found in Lorenz and Kapella 2020 [6]. The children demonstrated ICT competence to varying degrees and a very broad awareness of the associated risks and dangers. However, in only some of the interviewees, this awareness translates into independent steps to protect themselves against these risks. For the younger interviewees, in contrast, it is rather the following of parental rules that ensures this protection.

The interviews mentioned are part of the AIF’s contribution to Working Package 4 “ICT and transformations of leisure”, which deals with the influences of information and communication technologies in the leisure time of children and young people. At this point, we would like to thank the entire DigiGen team for their constructive feedback during the planning, implementation, and evaluation of the interviews.